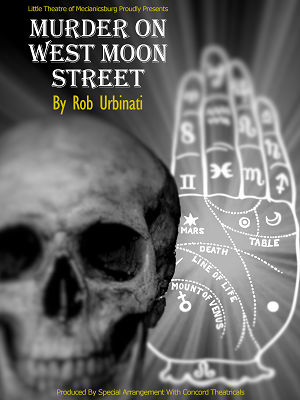 Young Lord Arthur is deliriously happy – just down from Oxford and engaged to be married – when a mysterious palm reader predicts that he will commit a murder. A proper English gentleman, Arthur believes it is his duty to get this killing business over with before he marries. But his education has not provided him with the required skills, and a hilarious series of mishaps ensues as he sets about finding a victim.

Seeking an ethnically diverse cast of 8 characters (4M, 4F) to play the following roles. A British Accent is encouraged.

Auditions will take place at the theatre. Actors will be asked to perform a cold reading from selections of the play. No monologue is needed.

We are so excited for our upcoming productions!

Interested in purchasing a ticket for our entire season?

To view our prices, please visit the Box Office page.

We are always in search of new talent! If you’re interested in Auditioning, check out our upcoming shows on our Auditions page!

Our Next Show:
MURDER ON WEST MOON STREET

Audition Date:
Monday, May 9 and Tuesday, May 10

*Please note our updated COVID-19 policy for all volunteers.*

Click the link below to become a Member, or visit our Donations page for more information!